The RAM ProMaster is one of the latest Euro-style vans to hit the US market. It instantly became a big hit with professional RV companies and DIY enthusiasts alike, with ProMaster van conversions becoming very popular with vanlifers.

For me, the most attractive things about choosing a ProMaster for your conversion are shape and size. When compared to the Mercedes Sprinter or the Ford Transit, the ProMaster is wider and more square.

This extra width makes it much easier to fit a bed horizontally across the back, which allows for many more layout options.

And the interior has much more straight edges and right angles, which makes cutting wood and fixtures a lot easier.

These two features alone are big and are why this is my first choice van to convert.

If you’re still unsure whether a ProMaster is the right van for you, check out our guide to help you find the best van to convert into a camper.

What are the interior dimensions of a Ram ProMaster van? 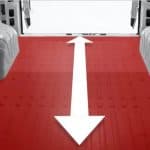 Josh has done a really fantastic job converting this 2015 Ram Promaster 3500, it’s the extended edition and the biggest ProMaster you can buy.  It’s particularly striking from the outside, with its cool looking matte paint job.  Josh says he regular gets comments and questions about the look of the van, so maybe it’s not ideal if your intention is stealth.

The van has 330W solar on the roof, and a sizeable 300AH lithium battery (equivalent to around 600AH regular lead acid batteries). Josh spends 90% of his time boondocking and only goes into the city to stock up his van with supplies and visit friends.

Peya converted this bright and beautiful Promaster van with the help of her Dad and a family friend at her Dad’s shop in Northern Idaho. The conversion took around one and a half years working on it in their spare time and taking winters off.

Peya designed the van herself, after watching endless hours of YouTube videos on van conversions, she picked up ideas and tips from all that she learned. Her top recommendation for would-be vanlifers in the planning stage is to watch videos on others saying what they would change about their van. This way you get an insight into the mistakes others made before you make the same mistakes yourself.

This super clean build was made by Erik & Gina of Narrow Road Van Conversions. This conversion has a real feeling of quality about it, with robust and long-lasting components used throughout this professional build.

Trent & Allie have a popular YouTube channel and have been living full-time in this van for one year when they filmed the tour above. So you get a little insight into some of the things they changed from a year of full-time living experience.

This 136″ wheelbase Ram ProMaster is built for a single person and made to be stealthy for invisible city dwelling.

I’m a big fan of the simple and functional feel of this van. It’s clean, high quality and but minimal. The van contains everything needed for full-time living including a toilet but no shower. Given that it’s intended for city dwellers, there are plenty of places to shower in most cities.

They went for low profile marine hatch skylights on the roof, as well as low profile solar panels. So from the outside nothing is visible on the roof. I especially love those marine hatches and am surprised they aren’t used more often in van builds, I expect that might change in the coming years.

This UK conversion is actually a Fiat Ducato van, but the Ram ProMaster uses the exact same body/frame.

This is an incredibly unique build and really has the feel of a wood cabin.

Artist Clare was sick of paying a mortgage on a large house that remained half empty. So she sold the house, bought an empty van and found people to build her dream home on wheels.

Here’s another ProMaster van conversion that impresses me a lot. Everything in the van is run off of solar and electrics, no propane. Obviously this requires a substantial soar and battery setup. They have 800 watts of solar, and a 700ah AGM battery bank. Not too shabby at all huh.

This conversion was built by an electrician so there are some great touches in the electrical department. With 1,000 watts of solar and a 600ah lithium battery, this thing is a juggernaut of off-grid electrical power.

But a lot of thought has also gone into other areas of this build, with great care being taken to ensure mold never becomes an issue. Lots to learn and admire from this build, make sure to check the full tour for this one.

Shannon and her pup Gracie have been living in a Ram Promaster 3500 extended for over six months.

Her kitchen features a convection stovetop, a 12-volt Isotherm fridge, and a Birchwood butcher block enclosing a farmhouse sink. Shannon designed her tiny home in a 3D program, incorporating an elevator for lifting and lowering the bed and a special rack to store her skis and other sports equipment.

620 watts of solar power are mounted on the roof, along with 600 amp hours of lithium batteries.